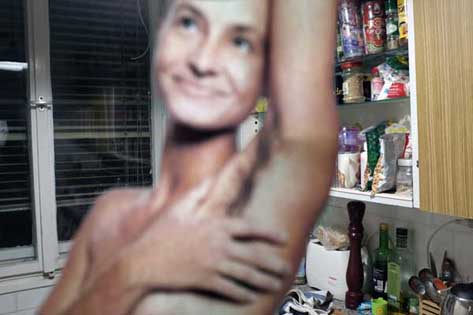 “In the past two years I have thought about pictures only as a picture editor. The series “Antiglamúr” tells of this period. Barriers dissolve, what becomes visible is only located between the lines. As these pictures are illustrations to a non-existent text, they do not need to adjust to anything. Somebody is always alert on the photos. Certain characters pull away, to the background, while others are willing and able to step up into the spot light. The difference between these two types of responsibility is a potential drive to interpret this series. The pictures were taken in Ukrainen, Belgium, Lithuania, Kosovo, and Hungary.” – Krisztina Erdei

Attracting international acclaim, works by Krisztina Erdei were shortlisted for BMW prize at Paris Photo 2010. Erdei’s spicy humor and inventive cultural analysis sheds new light on one’s everyday surroundings, typical situations of life.
One feels at ease thinking along the same lines as she does–the resctructuring of one’s environment through communication of expressive, subjective content not only requires, but also triggers creativity, braveness, and sophistication. Krisztina Erdei’s photos make one think. Bizarrely organic constellations are pointed out or created, ever readily to surprise the viewer.
It is never irrelevant where they have been taken–these pictures unfold histories in which the spirit of the locus speaks. All that takes place in the so-called peripheries, could not underestimated. Contemporary feel in Erdei’s photos does not equal with worldly sterility of the iconic places, but rather in the grotesque found in hidden contexts, the triumphs of reinterpreting the local and the petty with a vividness of perspective.
These pictures are critical without becoming judgmental. Providing analysis with apparent care and fondness–although they notice what is revealed in rustic misinterpretations appearing as absurd with globalized eye, they do not prompt condescending laughter, but rather true, thorough attention.